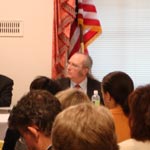 Washington, DC, June 6, 2007 – On Monday, June 11, the National Association of Broadcasters (NAB), the National Telecommunications and Information Administration (NTIA), the U.S. Hispanic Chamber of Commerce and THAT Corporation will take a hard look at the millions of low-income and minority communities who have been overlooked in governmental preparation for the digital television transition (DTV) during a one-hour roundtable discussion.

Previous DTV discussions have focused on the coupon program and meeting the stringent February 17, 2009 deadline. Although these are crucial elements of the program, for an estimated 75 million Americans there is even more at stake. For those Americans who cannot afford to purchase a new digital TV or subscribe to increasingly expensive paid- TV services like cable or satellite, coming home and tuning in to a favorite local station will no longer be a given.

Unfortunately, while government groups were focusing on the benefits of DTV, they were overlooking the television experience for many of America’s low-income and minority communities.