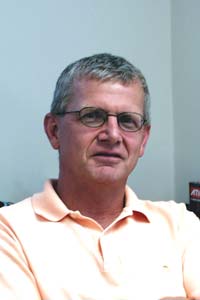 Milford, MA – In a move to strengthen its position as licensor of digital legacy audio technology to the TV industry, THAT Corporation has named Scott W. Skinner to the position of dbx-tv Licensing Support Engineer. Skinner will be responsible for evaluating licensee implementations of the company’s dbx-tv-audio standards intellectual property, which now extend to all worldwide legacy TV and FM audio broadcast standards (including BTSC, NICAM, EIAJ, A2, FM Stereo).

According to Les Tyler, THAT’s President, “Our base of licensees has grown significantly in the last year, as IC makers have recognized that legacy – primarily analog – TV standards must coexist with the latest digital transmission systems. Our IP enables IC makers to develop digital receiver chips for the old analog broadcasts. Scott will enable us to keep up with evaluations that ensure that dbx-tv-equipped ICs meet our strict standards of quality.” Scott’s most recent employment was at EMC as a Senior Platform Support Engineer. Prior to EMC, he served as Senior Electrical Engineer at Temptronic, where he spent 19 years. Tyler commented, “I knew and worked with Scott over 25 years ago when we were both at dbx, Inc. — where the original dbx-tv noise reduction system used in the US BTSC TV standard was invented. In a sense, now, he’s come full circle, to the first of the many spin-offs from dbx.

THAT Corporation, founded in 1989, licenses patents, trademarks, and other intellectual property to the TV broadcast and reception industries. Under the dbx-tv brand name, THAT offers digital (Verilog®) implementations of legacy TV audio receiver standards covering all parts of the world, including BTSC, A2, NICAM, and EIA-J, in addition to analog FM stereo. The company also makes and sells high-performance analog integrated circuits for professional audio manufacturers, including it’s well-known line of IC voltage-controlled amplifiers (VCAs) and RMS-level detectors used throughout the pro audio industry. The company is headquartered in Milford, Massachusetts, with offices in Tokyo, Japan and Milpitas, California